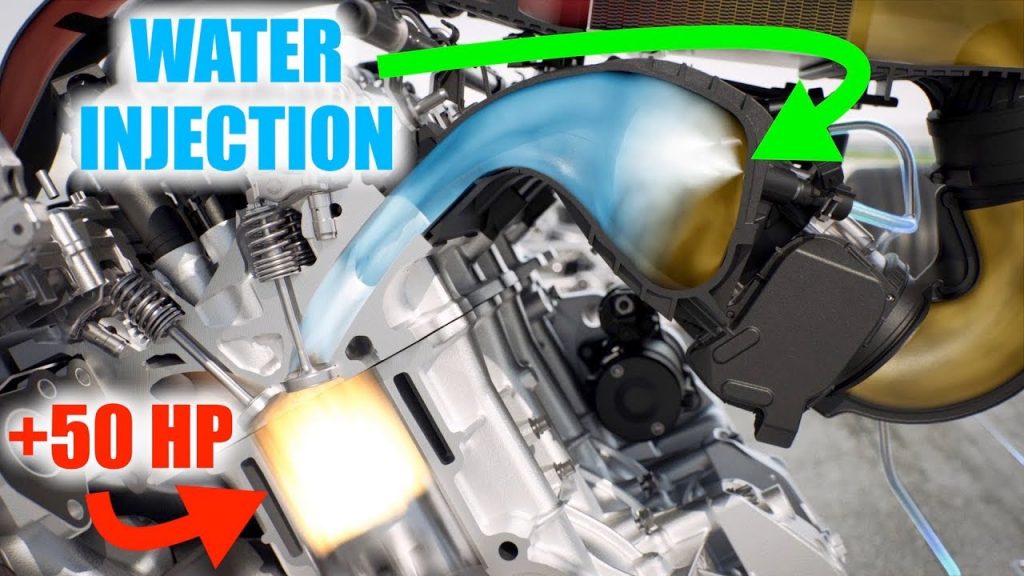 Lets dive straight into water injection and how awesome it is along with how misunderstood it can be.
Water injection has many advantages with it’s use not just gaining HP but also gaining safety from a bad batch of fuel, over boost or even a bad tune.

Take this example we had a customer who was using our water injection plate spraying 100% water.
The car was extremely consistent also fitted with a chiller, 12L reservoir etc. This car would run 10.7ET all day every day on the stock camshaft, stock heads on pump 98 in a VF GTS.

The car was tuned with a plex knock monitor, this monitor allows the tuner to tune for and listen for actual engine knock with the ability to then turn down any false knock and only sense real engine knock.

This part is important: The car had about 16 degrees of ignition timing out of the hole. About 50% of the runs it would have a hair of knock retard maybe 0.1-0.3 degrees and the other 50% of runs no knock retard at all.

The customer had a falling out with his tuner and then decided to seek out a remote tuner from another country with the intention of making the car faster to 1 up his last tuner. For 4 weeks of drag racing the customer beat the living hell out of the car with over 40 passes on the car.

On the 4th week the customer phoned and said tonight he was going to set a record with his stock cam/stock head combo. They were going to run a mix of 50/50 water meth. At which point we advised you are about to lose half of your combustion cooling and half of the knock suppression that the water is offering. The customer said “no it’s 50% methanol the methanol will have a combustion cooling effect when it evaporates”.

We explained to them no the minimal amount of methanol being injected would still in fact burn since it is a fuel and by removing half of the water volume you are losing half the combustion cooling and half of the knock suppression of the water.

This night at the track on the first run with the 50/50 water/methanol the customer blew up his engine, a rod exited both sides of the block after several pistons exploded.

The customer sent over his tune and data logs for review, upon examination it was evident that the tune had the following:
1. It was leaned out from a previous 11.5 AFR to 12.2AFR
2. The ignition timing out of the hole which was 16 degrees was now 24 degrees
3. The knock sensors were disabled

It was clearly evident why this engine blew up, remember it was on the edge of knock at 16 degrees of timing with an 11.5AFR and now it has 50% more timing at 24 degrees as well as a leaner air fuel ratio mixture and the knock sensors being turned off.

But here is the VERY interesting part: This car had 24 degrees timing, 12.2 AFR and the knock sensors disabled for 3 weeks of drag racing and over 30 passes other than using the 50/50 water/methanol in the 4th week and first and only pass that day.
The water injection was saving the engine, suppressing knock to some degree, lowering combustion temperature which would have been increased from the lean air fuel ratio and yes saving the engine from the bad tuner. That is why water injection is so important!

If you ever get a bad batch of fuel, a bad tune, clogged fuel injector….literally anything which will cause a cylinder to run lean you stand the chance of saving the engine.

As per the above video we saw very similar gains at the race track, our knock sensors were also tuned with a plex knock monitor and we were running on a 105 octane fuel. One pass we actually forgot to turn the water on. Because the engine was tuned correctly it sensed engine knock which would have otherwise been suppressed by the water injection. This resulted in the ignition timing retarding by 3 degrees in the top end of the track (when combustion temps are at their hottest) which showed a 1.5MPH loss in trap speed. (We know both the timing loss and the MPH loss equates to about 40-50HP)…meaning with the water we are gaining 40-50HP.

What was very interesting was some testing we did on the dyno:
On our car on the dyno it only showed about a 15HP gain to most Facebook Disneyland dyno racers this is obviously not impressive. However we found on this particular engine combo it made it’s best power from the water at 80% duty cycle of the water injection pump. If we turned the water pump down to 70% it would lose power and if we turned the water up to 90-100% this would also lose power.

It was at this point we made an assumption, that being when we are at the track we rip a burnout then we rip and pull through each gear and that likely the HP loss at 100% duty cycle may not be a loss as the temperature of combustion at the track would be hotter than the dyno.

For this reason we recommend you find the most powerful setting for the dyno (remember it) write it down and then when you go to the track try that setting followed by a little more water and see at what point on the track you lose MPH and then keep it at the setting which allows the most water to be used.

FYI – the HP loss on the dyno from too much water was only about 10-15HP loss, this is not of a concern.

Next on the dyno was a water temperature test, a customer installed his water tank under the car, we assumed this to be a stupid spot for it as at one point the water temp was 57c from absorbing exhaust heat.

What was interesting was the car was tuned and the water dialed in to make it’s best power, then the hot water was changed out for fresh cold 16c tap water, this made no HP gain, the pump duty cycle was altered to see if it wanted less or more water volume and it didn’t, then we swapped out the 16c water for ice water, we put a whole bunch of ice in the tank as well as very cold water which we earlier put in the freezer.

This too showed no additional gains.

Cylinder pressure = HP That is what HP is, the more pressure we can create, the more driving force we can exert on the piston = the more HP created. When the water vaporizes this creates more pressure. Sure we’d all like to gain 50HP and this is another method to do so.

Why is this good? This isn’t good it’s bloody great carbon build up will effect how much air your heads flow on the intake and exhaust port (especially the exhaust port) it can also cause damage over time so having it cleaned out of the engine constantly is great.

Knock suppression: The killer of engines is detonation or knock, if you get it large enough or often enough you will break the engine, even if it’s a built engine. The fact that water can suppress knock and gain you power at the same time is great, plus water costs less than peanuts.

But methanol injection is better? Methanol 100% has it’s uses, we are in no way against methanol use, in fact quite the opposite.
Here is the deal lets say you find the ideal water volume to be 1000cc. Now someone comes along and tells you your doing it wrong and you need to run 100% meth injection like they run. Just ask this question “what volume of methanol should I run?” If the answer is as example 1000cc then simply increase all of the nozzles to give you 2000cc and then run 50/50 water meth. Now having the octane benefits of the methanol as well as the combustion cooling/engine cleaning/knock suppression/engine saving benefits of the water. You now have the desired level of water and meth. (Obviously don’t pick how much methanol to run based on what someone says use a dyno/tuner/AFR meter).

What is the best way to inject water into the engine? Simple answer is directly into the intake port. You will hear some cowboys tell you to inject it pre throttle body for “cooling the air temperatures” this has minimal effect. Water injection works best when the mist of water is extremely fine as in very very very fine mist of water, this allows the water to easily vaporize vs a large droplet of water.

When water is injected pre throttle body the droplets of the fine mist will join together creating larger droplets when they hit into the supercharger rotors as well as the intercooler, adding to this you then may have an uneven distribution into each cylinder.

On the LSA platform we sought to have direct port water injection however the injector boss was in the way, so we did the next best thing which works extremely well is to place the nozzle between 2 ports over the hump between the ports this results in the best split of the water into all cylinders on this platform of engine. And it was evident when we pulled the engine down looking at the carbon build up (or should we say lack of carbon) that all cylinders looked to have received very equal amounts of water as they all had an extremely similar appearance. 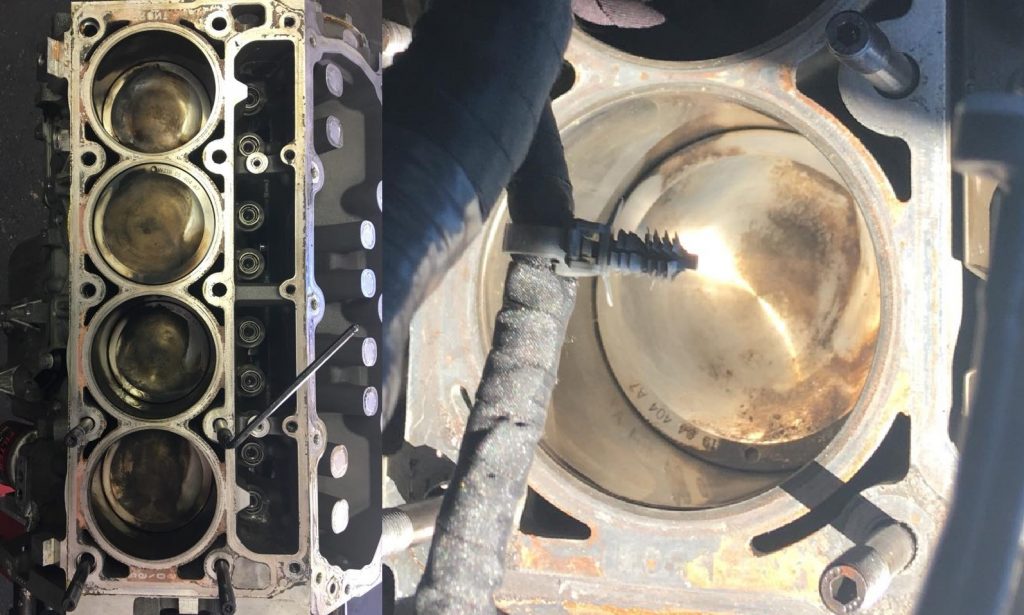 The same type of engine without water injection: 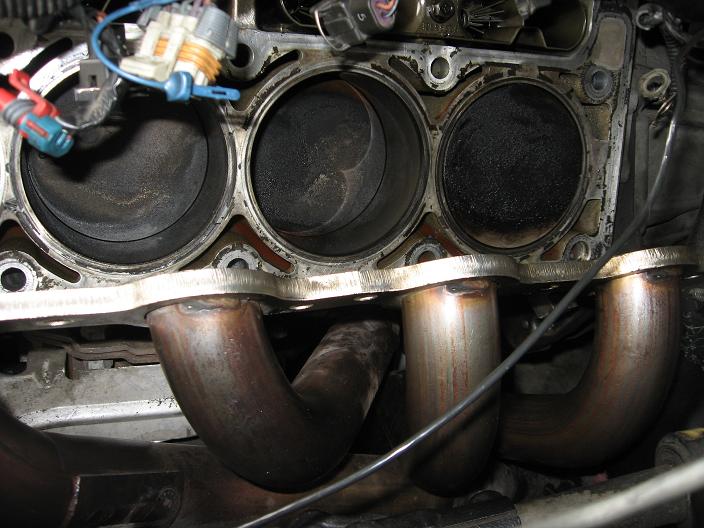 Read more about our LSA lid spacer which is compatible with 100% methanol injection and water injection here: https://fiinterchillers.com/lsa-lid-spacer-with-water-meth-injection/