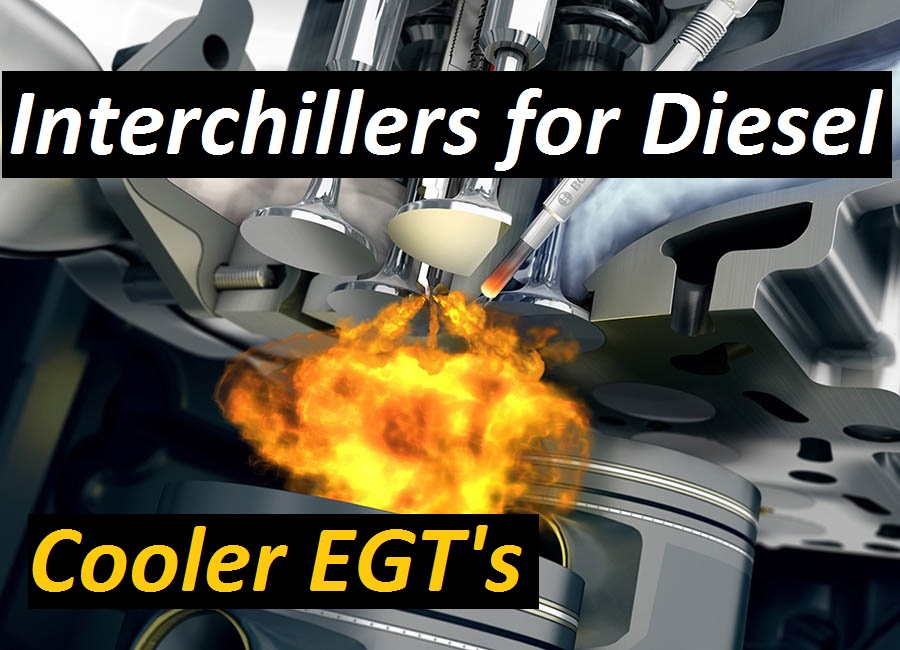 Over the years we have had our interchiller installed on many diesel applications, we just haven’t had the time to tell you about it…they work great!!!

Below we will get into the juicy EGT data you are all wanting to see, but first lets go over how this all works.
Firstly as we all know…or “should know”, the colder you make the air charge the more oxygen it carries, more oxygen = more bang bang (Horsepower in the real world)

Lets talk about air to air (A2A) intercoolers and how they suck…yeah lets bag them out first!
We had a customer in New Zealand who purchased a new diesel powered 4WD for towing around 2-2.5 tonnes for his work, he jumped on google like we all do and found some place flogging a larger A2A intercooler specifically for his model car….it was DYNO proven to gain power…yeehaa!

Anyway what these jokers showed on their dyno proven HP gains was in fact a gain in HP and a reduction in intake temps….we are on to a winner so far right?…..right? aren’t we? Well not so soon. What they didn’t tell you was, that the massive air to air intercooler was going to steal a crap load of air flow to your engine radiator and raise the engine temps in sacrifice for lowering the air temps, now the air temps are a little better…..but the engine coolant temp went from factory 87c (188f) and now after the massive intercooler is installed and blocking loads of air flow to the radiator it has shot up to 110c (230f)….ohh no….yes ohh no is right, this is all kinds of bad.

Now in no way are we suggesting this is the case with all aftermarket A2A intercoolers but it certainly was in this example, it’s also easy to see why it was and why there is the “potential” this can easily happen. Que in all the guys saying “well on my kit I run an extra fan on the front and another one on the back and that fixes the issue”……ok we got that out of the way for you.

Anyway this is a bad feature of the A2A intercooler, we do not want to increase our engine temp, wear crap out faster and have issues, being that this 4WD was already factory A2A and simply a larger A2A was fitted (well known brand too) and it did this to the engine coolant temp that’s not a good thing.

Next up they suck because you have to push through the 17,000ft of pipe work from the turbo to the engine, along with having that HUGE intercooler also means you have to pressurize that sucker, in order for air to come out the other end. Now compare this to a nice water to air intercooler we 2-4ft of pipe going from the turbo through the W2A intercooler and into the engine….ahh that’s way better.
Now we have less pipe work, which creates less effort for the turbo to push through, reducing not only turbo lag but also increased CFM (air mass) as it’s now easier and can flow more air….win win 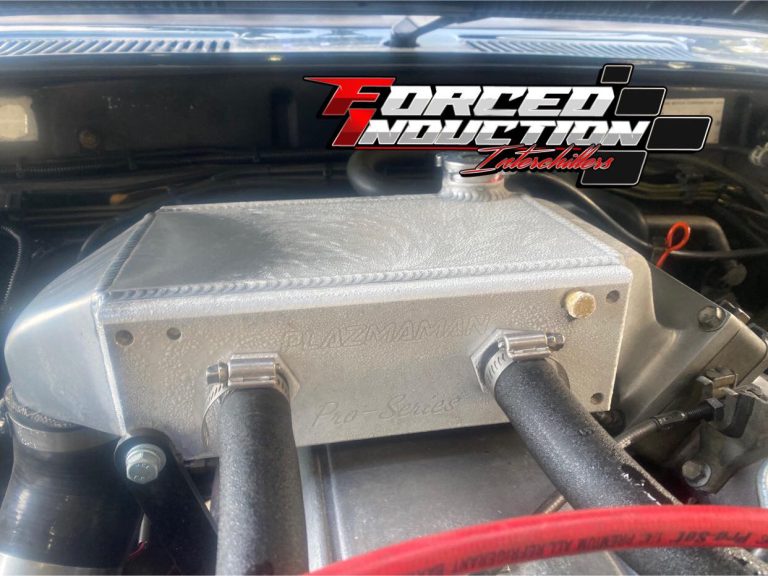 What the heck is a boost double double?
Let’s explain, this is bloody awesome, first we will talk about a supercharger so you get the idea of how this works.
In a supercharged application we get some boof heads call up every now and then, they pipe up and say “right listen here mate, I picked up the 50hp like you said however I LOST 2psi of boost WTF”
At this points you gasp for air, thinking “ohh here we go again, lets explain this and hope they understand it, this could be difficult to comprehend, talk slowly that might help”.

Ok so our air is now much colder and denser with the interchiller vs hot and expanding, this shows you have improved efficiency of the engine, air expands when it is hot, so it increases the pressure in the plenum and because now it is really cold the air is denser, carrying more oxygen within that given space but under less pressure too, which is a good thing, you want it to be lower in boost, this is good.

On the turbo side of things the exact same thing occurs….however unlike the supercharger which is a fixed RPM that the superchargers turns at your turbo isn’t fixed in it’s RPM. Because the engine is now making more power, the turbo is also receiving more exhaust gases and it too is spinning faster, so whilst the air is colder and denser under less pressure the final result is a boost gain, eg if you are up 2psi it’s more likely you are actually up 3-4psi which is great. (As you have reduced the air temp, made the air denser which lowered your boost, but since the engine made more power your turbo also spun up faster also sucking in more air CFM and yay you are now making more boost as well)

Now you have changed from an A2A setup to a W2A with an interchiller you have achieved the following:

EGT data
How many of you skipped and scrolled down to here to see the data?
Good customer Phil Barlow with his 1997 Nissan Patrol GQ fitted with a 6.5L Diesel Optimizer Chevy V8 was kind enough to share his EGT data with us after the installation of our interchiller on his 4WD.

Then you simply need to connect the intercooler to our interchiller, you can read more about how our interchiller can be run on any car, any make, any mode, any fuel type and exactly how we do that right here: https://fiinterchillers.com/tech_articles/how-does-a-universal-interchiller-kit-adapt-to-my-car/

Someone said improve fuel economy didn’t they?
Yes we did, because the engine is now more efficient it takes less pushing down on the pedal to exert the same level of torque as the engine now makes more power, if you are running conventional wet port injection (most diesels are direct injection) however if you have wet port the intake valve and intake port are now much colder so you have less fuel lost to evaporation.

Lastly this video is a great example of how reducing your intake temps can improve, HP/TQ, fuel economy and how watching that boost gauge isn’t always the answer.
Maybe one day Banks can invite us out and we can repeat this testing again, but with our chiller hooked up, anyway you get the idea watch this video we even found it really informative and obviously the results achieved will be even greater than those shown in the video when we REALLY smash those intake temps down