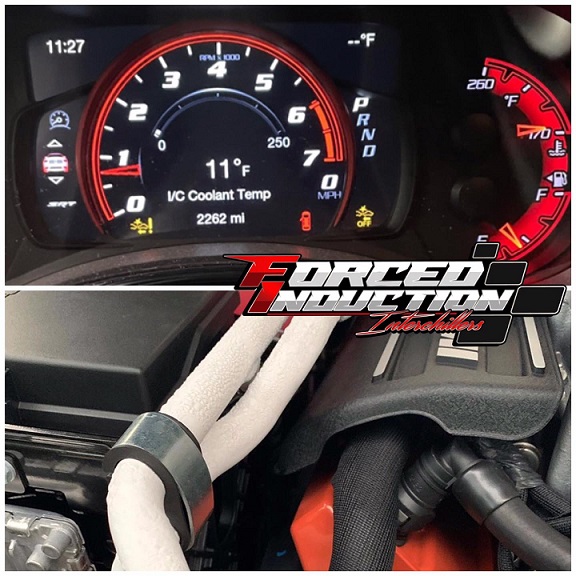 Firstly we all know or we all should know that in order for fire to burn it needs oxygen. Without oxygen there is no fire (remember seeing a fire blanket thrown over a fire starving it of oxygen).

To make HP we want to burn fuel, the more fuel we burn the more power we make.
In order to burn more fuel we need more oxygen….plain and simple that’s how it works.

In a turbocharger or supercharger application they are compressing air (more air in a given space than normal atmospheric pressure) you are inducing more air mass/volume/weight into the engine.
Unfortunately, when you compress the air you drastically heat the air as a byproduct.

Hence you then use some form of intercooler to lower the temperature of your now compressed hot boosted air.
At which point we realize we’d like to have some fluid inside that intercooler to better help keep the intercooler cold.
And then you realize that fluid should be as cold as physically possible.

For every 3 degree Celsius (5.4f) that you reduce your intake temps you increase oxygen density by 1%.

The oxygen density has increased 16.62% (potential power if tuned to suit all possible intake temps is 16.62% more power across the finish line)

This is why you want to get your intercooler fluid temp and the byproduct of cold fluid (intake temps) as cold as physically possible, the colder the more oxygen dense the air is, the more fuel you can burn the more power you can create…period!

The gain in oxygen content “almost” directly relates to the cars HP at various temperatures.

Without a chiller they go from 35c to 60c.
(This information has been confirmed by Autowerks Automotive – 100% independent results, you can also confirm with your workshop).

We can see from the oxygen density information that we have seen an improvement of 11.77% for oxygen density, which closely matches the near 10% power increase, likely with another 0.5-1 degrees of ignition timing it would gain another 7.3rwkw (9.7rwhp) and match it like for like at 11.77% 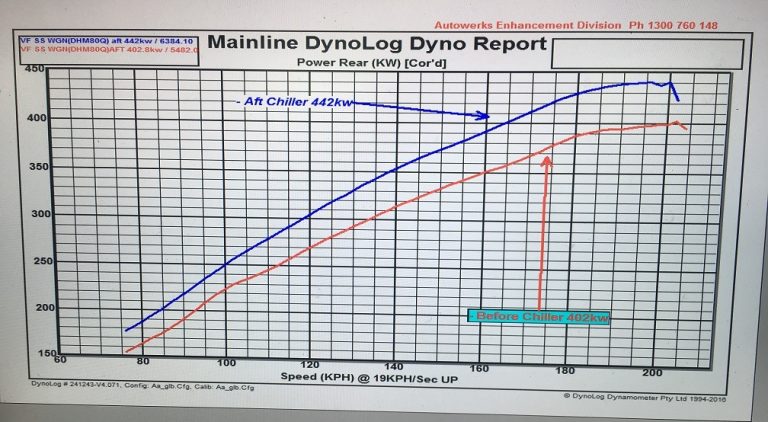 This is why it is important that we try to get our intercooler fluid as cold as possible, the colder we make the fluid, the colder our intake temps become, the more oxygen density we gain, the more power we create.

There really is no such thing as too cold, or at least we have yet to find it, the oxygen density calculator can be found here: https://www.engineeringtoolbox.com/oxygen-O2-density-specific-weight-temperature-pressure-d_2082.html

We have seen this in the real world at the track, as example we have been caught out before not paying attention to how fast each staging lane is moving, they have called our lane up to race, we have quickly gotten in the car to cool the intake temps down with the chiller, and staged at say 10c (50f) intake temps, then obviously not making the same mistake twice we pay more attention to the staging lanes and the next pass we stage at 5c (41f) and the car runs faster each and every time.

You want the best coldest possible intake temps that you can achieve as you are inducing more oxygen density into the engine.