So lets cover off all 3 right here, break it down, show you proof, videos you name it.

All gain more power with the chiller combined, now lets talk about how and why:

People think methanol is unbeatable, many drag cars run 100% methanol without any intercooler, they work great because yes there is evaporative cooling with the methanol but this is also due to the sheer mass of fuel required, methanol engines run 220-250% more fuel mass than petrol, whereas E85 is only 30% more fuel mass. This huge increase in the mass of fuel is resulting in some really good evaporative cooling, even to the point where ice can form on the supercharger hat at idle (under load different story).
However it has been shown that when under wide open throttle there is even more power to be found with running a well setup intercooler system. In these light weight drag cars this is a decision that needs to be made “to have or not have the intercooler” due to the added weight of the intercooler system, it may even be the wrong decision but that’s on the race team.

Now that we know the intercooler is still needed and gains power, it makes sense to have the coldest possible fluid entering that intercooler.

These numbers we are going to make up but the example is still relative.

You can obviously see you have now gained power, with colder denser more oxygen packed air.
(The temperature differential post intercooler drop from the nitrous is still the same, just the air exiting the intercooler is colder so the nitrous can make “that air” even colder).

We are a fan of methanol use, our current drag car is being setup for it as we speak, we have plenty of customers who also use methanol.

However, meth injection needs to be understood:
Yes, meth injection can lower the intake air temperature however it’s not as good as you are led to believe.
Most often if a large IAT reduction is shown this is because it is evaporating on the actual IAT sensor, hitting and cooling the sensor more so than cooling the air.
This makes sense for several reasons the methanol is obviously denser than air (heavier) even when sprayed in a fine mist, it therefore is more likely to hit hot surfaces and evaporate on those surfaces and cool the surfaces off instead of cooling the air mass since the air mass is so much lighter than the methanol (meth isn’t going to smash into an air molecule and just evaporate) it’s the metal surfaces that the methanol comes into contact with, as example the intake tube or supercharger rotors. Touching these can be cold with your hand which leads people to believe the air inside it will be cold, when it’s simply not.

In this video you can see exactly this, it has cooled the snout/bearing housing. What you are seeing is ice formation as the surface is now nice and cold and because this is a 50/50 water meth mix the water is freezing and sticking to the cold surface:

Obviously, this results in a slight reduction of intake temps (the components that the air hits are now colder).
However, as example on the LSA platform we have sprayed 1000cc and even 1500cc of 100% pure methanol pre blower and see no reduction in IAT2.

We are 100% aware that some shops relocate IAT1 into a breakout harness into the intake tube pre throttle body you can see that here in the data log at 31:30 (pause it at 31:52). 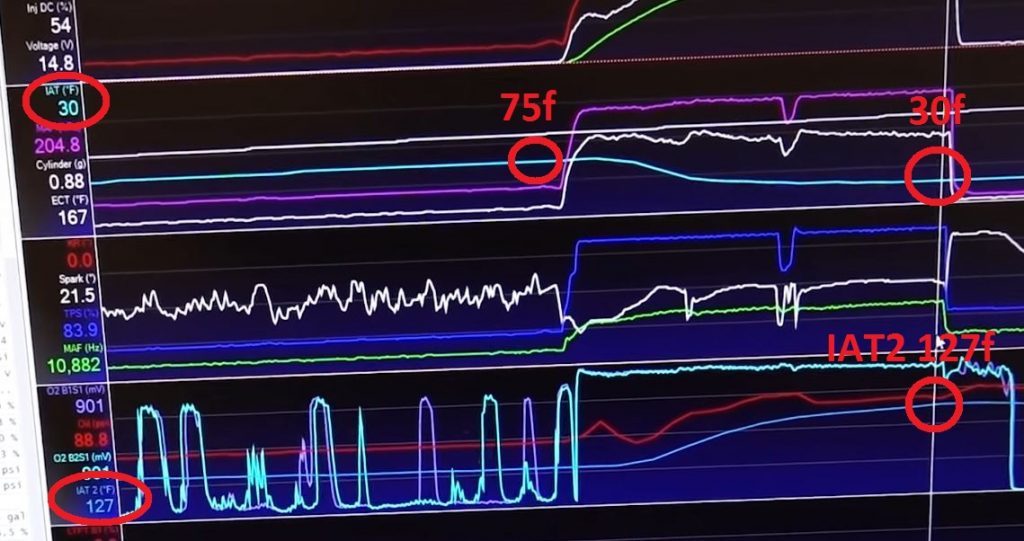 This obviously makes everyone think wow, my intake temps are so cold, yet IAT2 still behaved the same way it normally does and still peaked at 53c (127f) (as per the screen shot above).

As you can see this is the same results, we have seen that the meth has not done anything for IAT2 at all. And that it is 100% hitting the IAT1 sensor, evaporating and cooling that sensor….no effect on IAT2 (the most critical air temp right before combustion IAT2).
If the methanol did cool the air charge then IAT2 would have been lowered, this result proves the meth is simply evaporating on the IAT1 sensor.

So, what is the methanol doing?
Remember we said we are a fan of meth, and we are plumbing our current drag car with methanol too.
Sure, there is a minor reduction of the air temp before the blower heats the air, but the main benefit is methanol is 120+ Motor octane and it carries 49.93% oxygen.
You will also notice the Stoichiometric AFR of Methanol is 6.45 parts air to 1 part fuel, whereas petrol is 14.8:1 and you are probably aware you normally go to about 11.5:1 AFR when in boost whereas the methanol goes down to around 3:1 to 4:1 AFR extremely rich with masses and masses of fuel.

The main gain from methanol is its ability to carry more oxygen (49.93% oxygenated) to the cylinders, anti-detonation properties and having an octane of 120+

Yet we are not saying don’t use meth, we like it and encourage you to use it, the more cooling the better, the more octane the better. Meth in no way replaces the intercooler, or the need for freezing cold fluid in the intercooler.

By having fluid volume Vs your intercooler pump flow rate eg say you have 10L (2.6gal) of fluid you can now pass -10c (14f) fluid through the intercooler for your entire time spent at wide open throttle, if mile racing 20L (5gal) is needed again giving you a fixed temperature of fluid entering the intercooler -10c (14f). If the fluid is too small the volume of fluid will complete multiple laps on itself re-heating the fluid several times, this is why tanks are important even with a heat exchanger, chiller or ice box as your fluid can do multiple laps on itself without one.

Now you understand the chillers job is to make a tank of fluid cold.


We don’t care how you make your tank of fluid cold!!!

Use ice, our interchiller, superman whatever just make the tank of fluid cold so that you then have the coldest possible fluid entering the blower thus lowering your intake temps as much as possible.

If interchillers don’t work, why do guys run ice in the ice box? Ice shouldn’t work either if chillers don’t work. In fact ice is warmer and it also melts as soon as the return hot fluid hits the ice.
At the absolute minimum temperature “water” going to the blower (remember ice has to be water to flow) will be 3-4c (38-40f) (however far more likely to be 7-10c (45-50f) as the engine is running, heating it up).

Remember only the temperature of the fluid is of concern, with the chiller it’s colder than using ice.

On top of that after you rip a burnout, guess what your ice is now really melting, the chiller however is still cooling you down.

Some will argue it takes more energy to melt ice into water than heat anti freeze up, yep 100% true but who cares?
All we care about is passing -10c (14f) through the intercooler, if you have fluid volume in your tank (just like ice tanks have) then your fluid wont heat up. If you baffle the tank that will take even longer for the warmed fluid to mix with the cold fluid.

At no point can melted ice… “water” be colder than a chiller with anti freeze, remember our goal pass -10c (14f) through the intercooler as fast as possible at a constant temperature then the hot boosted air will hit the intercooler and drastically change temperature.

With a chiller we can be well under the ambient air temperature sometimes in mere seconds. Remember just like ice we have stored fluid volume too we can start the car after it’s been sitting for 1hr and still have 0c (32f) fluid in the tank.

From a dead start (fluid at room temp or even heat soaked) we can be under ambient in 2min.
Most of the time we will start the car at the same time everyone else does, no different to the ice tank setup.

I don’t care about having slightly warmer temps with ice vs an interchiller, so why should I change?
Good question lets say you have your ice box and that fluid temp is 5c (41f)…well after the burnout it’s not going to be 5c (41f) anymore you will have heated it, your ice will start to melt and the temperature will climb during this period. The car with the interchiller it too will have heated it’s fluid from the burnout however it is still being cooled by refrigerant in the chiller (R134a boils at -26c (-14f), in fact the longer the car with the chiller takes to stage the colder it will become and the warmer the car with ice will become as the ice continues to be heated.
(The car with the chiller can take his time to stage knowing he will get colder, but also knowing he’s actually heating the other car up, that’s called strategy and can be the difference between winning and losing a race).

Now lets assume the 1/4 mile pass is over you are on your way back to collect your time slip, the car with the ice now has water that is luke warm/cold…it’s no longer ice. The car with the chiller is cooling back down again getting ready to do another pass.

The car with the ice (now water) pulls into the pits drains the water and buys more ice and also needs a location to store the ice and keep the ice cold..maybe even a freezer….kind of like a chiller 🙂

Tuning advantages of a chiller
The interchiller provides way more advantages than just giving you colder intake temps you are able to tune and simulate any possible intake air temp at any possible RPM and load point in the tune. This gives unlimited tuning scope for a tuner to have the ability to add and remove the correct amount of ignition timing in the tune. Lets say your intake temps on the dyno during tuning without a chiller go from 40c (104f) to 70c (158f) this is known as the tuning window. You are unable to simulate intake temps below or above these temperatures. Therefore it is not safe to add ignition timing in the tune below 40c (104f) and above 70c (158f) you MUST over estimate how much ignition timing to remove from the tune to play it safe, should too much timing be run and it gets too hot a knock event or detonation could occur so the tuner must play it safe and remove an amount of timing they deem a safe guess.

With the chiller we can simply turn it off, we can start power runs at any temperature from cold to hot, giving the ability to tune whatever intake air temperature you will ever see. Not only do you walk away from tuning knowing you are making the most HP possible at any given intake air temperature you know the tune is safe, should you ever have an intercooler pump failure, or hose leak etc you have already simulated both hot and cold temps you will be completely fine. More details on tuning can be found here: http://fiinterchillers.com/why-does-my-tuner-want-me-to-fit-a-chiller/