These results were originally published on Lingenfelters forum, which has since closed, often people are looking for these results so we have posted them here for you. (The only result which has not been included in the flow testing was the 1″ -16AN hoses on the EMP pump which resulted in a flow rate of 40L per min on the car 10.5 GPM).

Many intercooler pumps on the market fall on their ass and do not meet the claims made on the labels.
We’ve been telling many people about this but now it’s time to make a tech article on it.

Most of the aftermarket pumps that are sold with today’s aftermarket superchargers are average at best.

Here is what happens when the intercooler manufacturer tests their pump flow rate they get 1 empty fish tank and 1 full fish tank, they put the hose size on that everyone intends to use and time how long it takes to pump X liters per min, test it a few times to confirm the results and or use flow meters.

This is far from real world, in the real world when installed on an actual car the pump has to deal with tight bends but more importantly restrictive intercooler cores and heat exchangers with tiny and thin passage ways within those cores, this is where the pump flow rate needs to be tested on the actual car under correct system pressures.

Fortunately to sift through all the bull Lingenfelter have done all the hard work for us and have done the tests on an actual ZL1 Camaro intercooler fluid loop and the results are shocking some pumps claiming 208L per min actually ended up being 14L per min.

Forced Induction Interchillers is the aussie distributor for the EMP pump, you can purchase it here: https://fiinterchillers.com/stewart-emp-pump/

————————
(Within the below copy and pasted information we have added the Liter per min data in brackets next to the GPM data).
Lingenfelter results:
Here are some of the results of recent electric intercooler pump testing performed at Lingenfelter Performance Engineering.

We have performed this type of testing before on several of these pumps but, since we recently upgraded our coolant flow measurement equipment to a much higher level of flow meter that allows us to very accurately measure flow over a very wide range of flows with very little to no impact on the system restriction, we felt this was a good time to perform this testing again and to do so on an expanded range of pumps and conditions.

For this testing we tested the pumps in two primary ways:

We tested a few other pumps as well but the above pumps are the primary ones we focused on.

During the testing some of the variables we recorded included:

All tests were repeated multiple times (at least three times), the data checked to make sure we had test to test repeatability and then the results were averaged to produce the data described below.

The Bosch 1150 LPH PCA pump continues to be the baseline standard pump used in many liquid to air intercooler systems in both OEM and aftermarket applications. In the ZL1 system it flowed 3.6 gallons per minute (GPM) (13.62L per min). This is the same pump used in the 2009-2013 Cadillac CTSV, Cadillac STSV, Cadillac XLRV, 1999-2004 Ford Lightning, Fort GT500 and many other OEM applications. It is also the pump used in Magnuson, Edelbrock, Whipple and many other aftermarket supercharger kits. It is fairly compact, very reliable and has low current draw. It performs fairly well against an outlet restriction but doesn’t flow as well as some of the newer, higher output pumps that are available. This same pump has existed for well over 10 years without any major design changes.

Also as expected, the ZR1 pump performed very well. It flowed 5.7 gpm (21.57L per min), 19% more than the stock ZL1 pump. For its size and current draw the ZR1 pump is a very impressive pump as it is no bigger than the ZL1 pump yet flows more than pumps more than twice its size and does so with 3/4″ hose fittings in and out. On the other hand it is a fairly expensive pump, with an MSRP of over $1000 and “street price” of not much under that.

The Stewart-EMP E2512A intercooler pump also performed well, matching the ZR1 pump flow when installed in the ZL1 circuit despite the fact that the inlet hose was 3/4″, not the recommended 1″ inlet. When we reprogrammed the Stewart-EMP pump to raise the internal pump speed and current limit, the flow was significantly increased to 7.7 gpm (29.14L per min). That is 60% more than the ZL1 stock pump. This pump performs very well at high pressure drops but the current draw does increase significantly when the pressure across the pump is high (when the restriction is high) so you need to make sure you account for that in your wiring. The Stewart-EMP pump is a pump we have been using for several years in high horsepower supercharged and turbocharged vehicle applications including our 1250RWHP Camaro SS, our white turbo drag Camaro, and numerous 1000-1600+ HP customer builds.

The 20GPM (75.7L per min)and 55GPM (208.19L per min) pumps we tested are pumps that are commonly being used and sold as intercooler pumps so we felt we needed to test how these performed compared to the above pumps that we use on a fairly regular basis. When tested with very little restriction these pumps flowed fairly well and used little electrical current to do so. Once the restriction started to increase the flow of these pumps dropped significantly though. Both pumps, when installed in a stock ZL1 intercooler system, flowed less than the stock ZL1 pump and not much more than the Bosch pump. At higher differential pressures (outlet restrictions) even the Bosch pump flowed more as can be seen by the graph of pump flow vs differential pressure. In 2002 when we were developing and testing a turbo Ecotec engine in the NHRA Sport Compact series we had found similar results. The billet housing electric pump that we had purchased and installed in the vehicle that was supposed to be a high flow pump actually flowed less than the Bosch production pump we were using in the low boost, 500 HP supercharged customer street cars at the time. As we found out then, many pumps being sold in the marketplace are being flow rated with no pump restriction and that many of these pumps did not flow nearly as well when tested in an as installed configuration.

Here are the graphs of the test data described above: 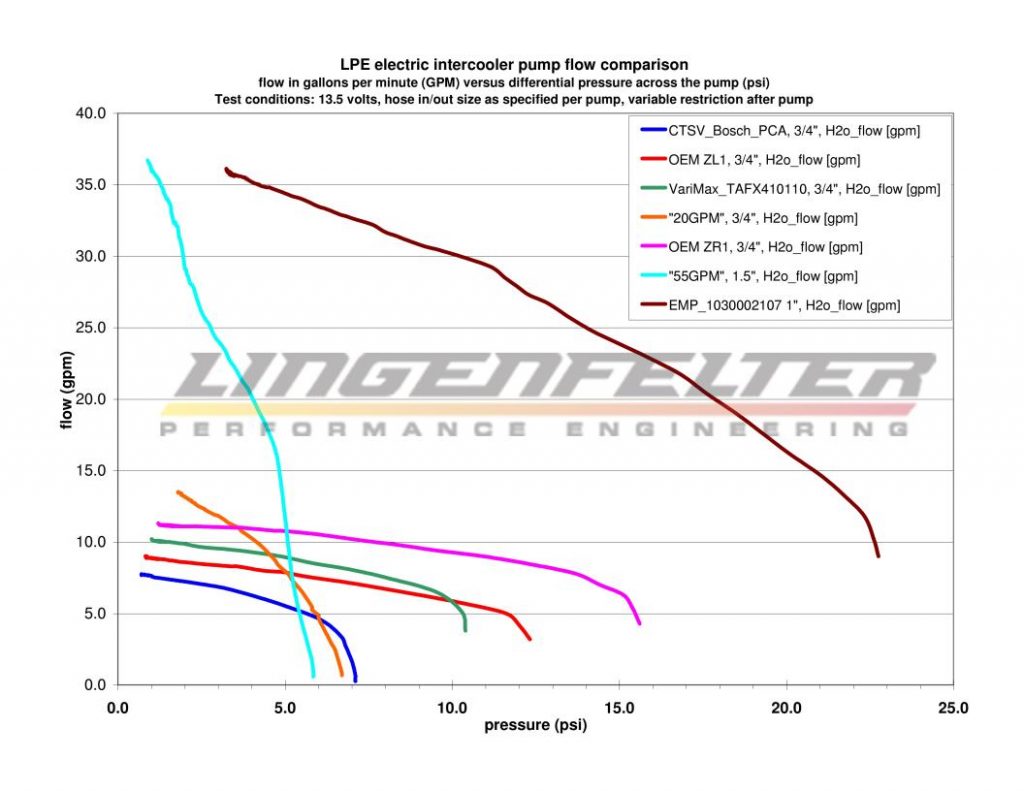 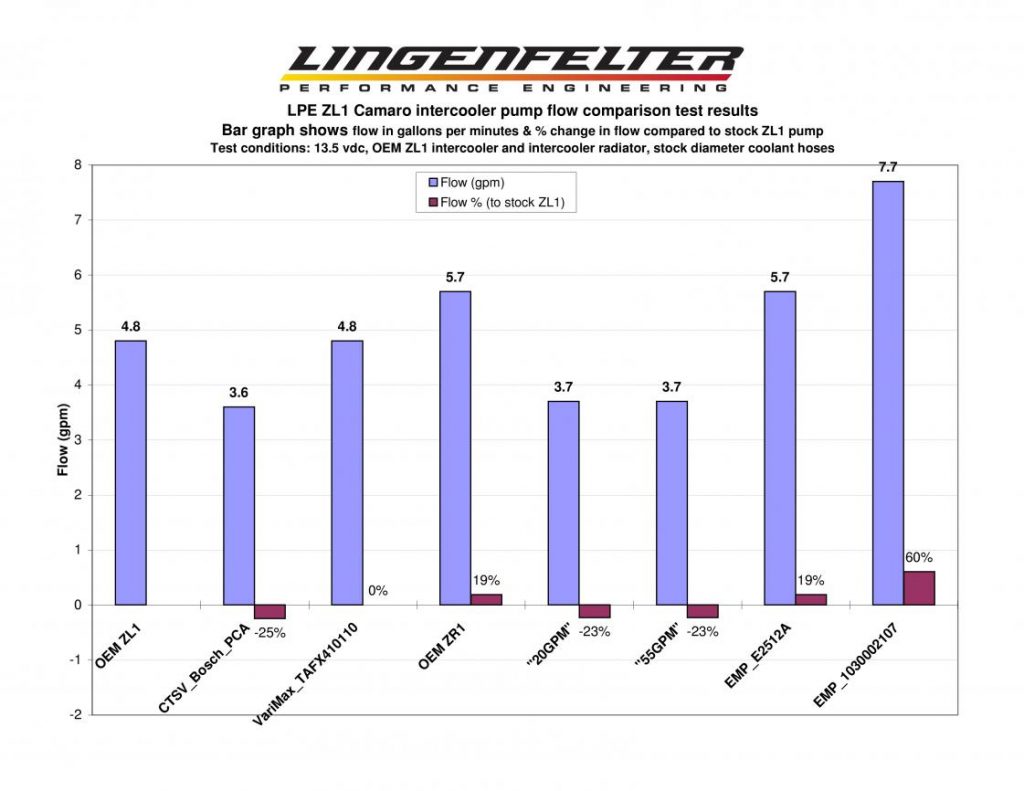 Pump images
Here are some pictures of the pumps that were tested: 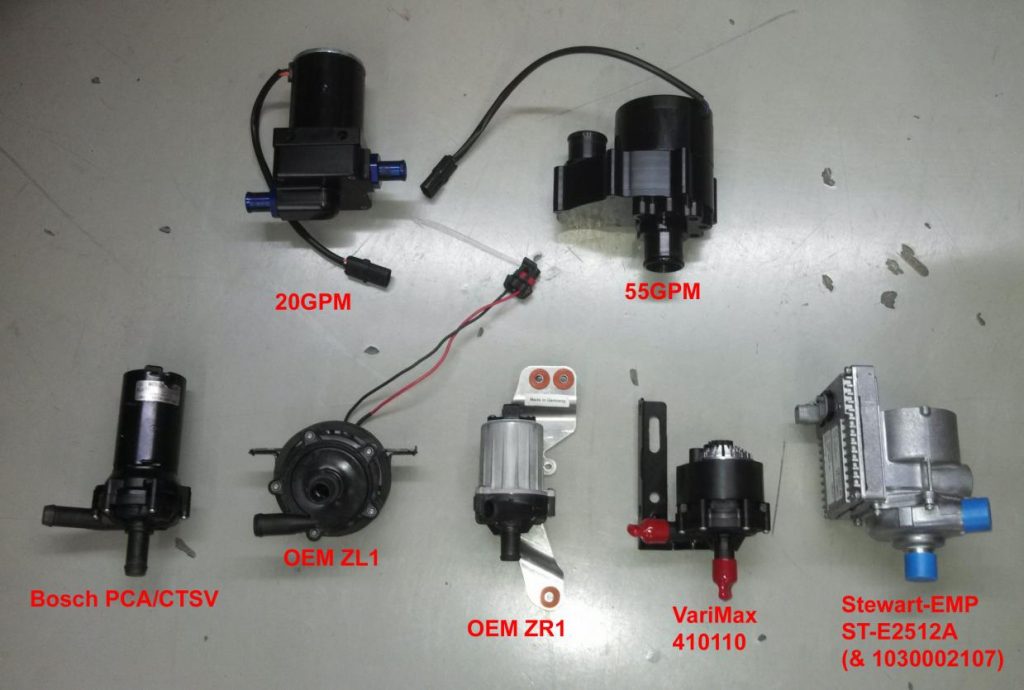 And here are images of some of the other pumps we have also tested (but were not included in the data above): 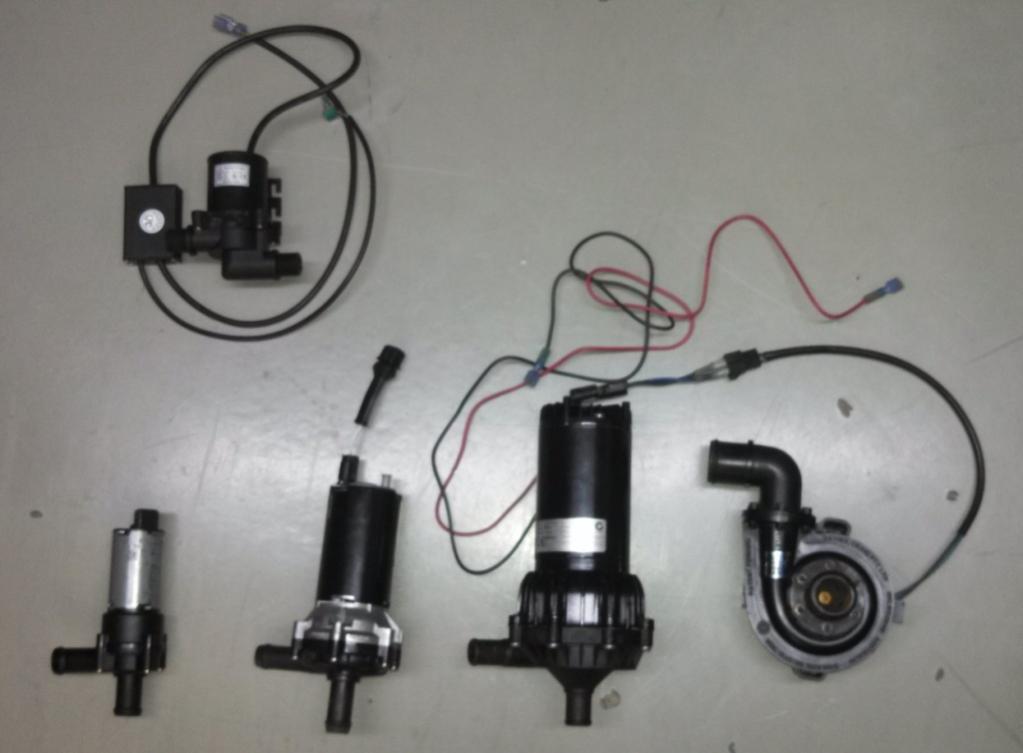 Current draw:
This current data is from when the pumps were tested at a fixed outlet restriction in the ZL1 intercooler and intercooler radiator loop (as shown in the bar graph data). The current readings are from the power supply so +/- 0.5 amps is probably about the accuracy of the data.

Make sure you account for the current draw of these different pumps in your wiring size and fuse sizing.

Added pump data – Rule 2000
Here is the graph again with a few of the pumps for reference and then the Rule 2000 bilge pump that a lot of drag racers use as an intercooler pump added to the data. In drag racing this pump is usually used in a large coolant reservoir that is filled with ice water. This pump is not designed for automotive coolant temperatures so it should not be used in a street vehicle application that might see higher intercooler fluid temperatures or more sustained use. This pump is a submerged bilge pump so it is mounted inside the coolant reservoir so the data for this pump is graphed versus pump outlet pressure (not differential pressure that was used for the other pumps). The inlet pressure is fairly fixed on this pump since it is mounted in the reservoir.

The pump performs pretty well but you want to be careful how much outlet pressure/restriction you have. If it is too high the flow drops off a fair amount. With just one heat exchanger (the intercooler), the amount of pressure drop in drag race applications is often less than if it had to also be pumped into/out of a intercooler radiator. Since every intercooler design can be different, it wouldn’t be a bad idea to check outlet pressure in your system. Past around 7 psi and several of the OEM type pumps are better. 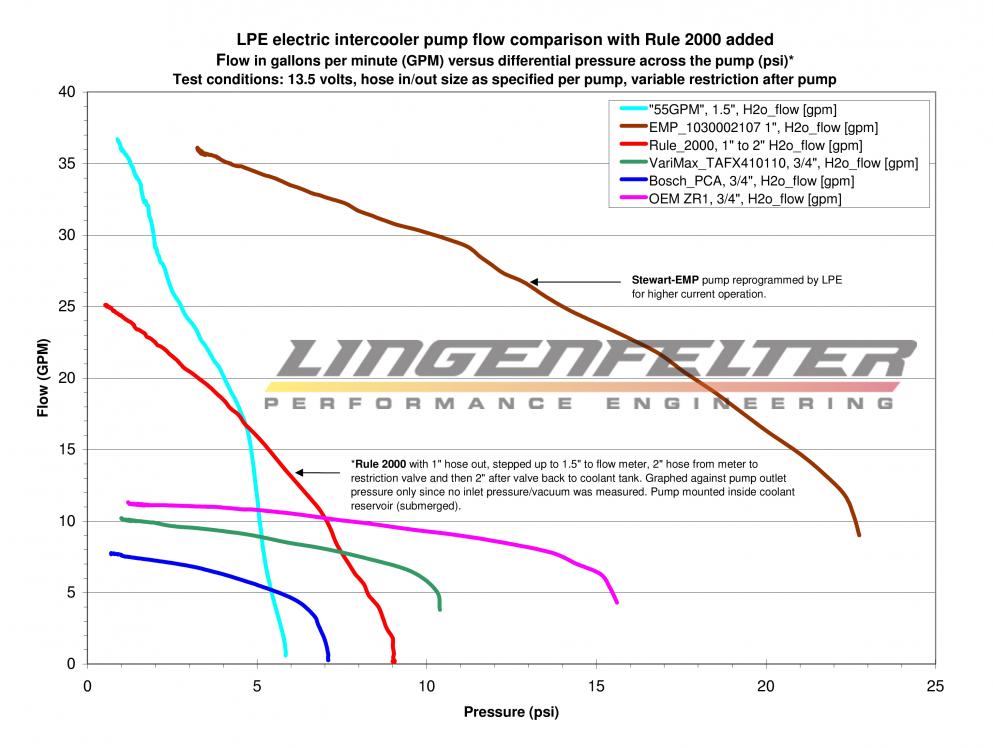 Flow meter used
We use a Yokogawa ADMAG AXF series magnetic flow meter with a high accuracy (0.2%) calibration to give us a high turn-down ratio (wide measuring range).

One of the advantages of this type of meter is that it does not create any restriction in the system unlike the turbine meters and some of the other types of flow meters.